I’ve had a couple of questions about my time through the 100 km mark at the Icarus 12 hour race. I guess others may have wondered about the same thing, so I’ll provide the answer here.

I passed through the 100 km in 10:28, which means it took me another hour and half to cover a further 8 km. By that stage I was stopping for drinks pretty regularly and walked a bit of each of the final few laps. Tony Mangan was crewing for me, and he’d informed me with several laps to go that it was impossible for me to miss out on first place, so I eased up (a good thing too, as I may have collapsed due to the effects of low blood sugar, had I continued to push hard).

Anyhow, I’d passed through the first marathon distance in around 4 hours (already beginning to slow a little), and I feel I could have comfortably kept that pace had the weather conditions been ideal. In fact, in cool and dry weather I feel a 100 km time of about 9 hours would have been realisable. Then perhaps a further 25 to 30 km in remaining 3 hours, to give me the estimated 125 – 130 km I spoke of a few days ago.

I have run 100 km previously in 8:45, although I stopped for 40 minutes for lunch (so officially that was a 9:26). My form last week was similar to my form in that earlier 100 km (which was not a race but a charity run), so the estimates above seem realistic.

I felt quite good running this morning – the first time I have felt fine since the race. I’ll still give myself a further easy week before resuming normal training. By the way, I ran 56 km in total last week. I was happy with that after such a hard race.

Today’s photo follows on from the Col du Tourmalet photo I posted a dew days ago. This was taken when Dave and I had reached the summit. On this occasion we’d ridden it from the western side, although we had also done so from the eastern approach two years earlier. It’s a tough climb, and perfect training for my world run, which commenced a couple of months later. 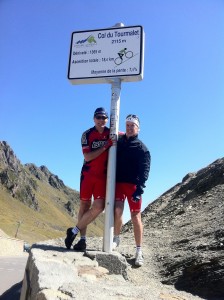 There was still quite a bit of long grass running today, but at least I had a tailwind. Once again, it was a day of flat and straight roads, with a lot of traffic, particularly this afternoon. I think it was the weekend traffic out of Buenos Aires. It’s toughening me up mentally for the Nullarbor, which, while just as flat and straight, should be a bit lighter on the traffic. In the interim, however, I’m really looking forward to the quiet back roads in Europe.

Carmel decided there was nothing new to photograph today, so she didn’t take any. She’s hanging out for some different scenery. I’m sure it will come.