I read recently about a guy who was running a marathon every day of October for the purpose of having his immune system response studied by specialists in the field. The hypothesis was that running that much actually boosts the immune system.

This idea is certainly consistent with my experience. Since I began an unbroken sequence of running on August 25, 2004 (nearly 4,500 consecutive days of running as I write this, without a day off) I have not once been sick. I’ve had the occasional upset stomach with a touch of minor diarrhoea, but nothing that even remotely prevented me from running. In fact, the healthiest I felt during this period of more than twelve years was during my run around the world.

If the doctors find the results of their guy running 31 marathons in 31 days indicate a boost in his immune system, then I wonder what they would have found if they’d studied me after my equivalent of 622 marathons in 622 days? I actually offered myself for study before I began, but I had no takers – not that I advertised it very widely at the time.

This photo was taken the moment I commenced my North American leg of the world run in San Francisco. I finally finished this stage eight months later north of Boston, having covered more than 12,000 km. 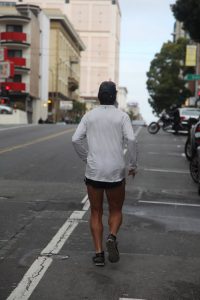