Four years ago today (Nov 8 in Australia, Nov 7 in South America) I encountered my most scary episode of the world run. In fact, it was pretty much the scariest episode of my life – coming within inches of falling to my death over a cliff in the Andes. For those who have read my book, you’ll recall the occasion from the opening chapter. I won’t go into it now, but you can read about the details again via the book, or via the blog post from that day by clicking on http://www.tomsnextstep.com/nov-7-2012/.

Coincidentally, that same evening I watched the coverage of the US election, with Barack Obama being returned to office. We’d been in the US most of that election year, experiencing first hand the opinions of many of the citizens in disparate regions of the country. I’m glad I wasn’t running through the US this year. I think I would have found the campaign a bit too intense.

Last week I woke up one morning with a very sore hip. I have no idea why. Ever since it has made both running, walking, turning my torso, and other activities quite painful, although the problem does seem to be subsiding a little now. It has prevented me getting back fully into my running, though I don’t see that as a major issue. I want to come into the New Year feeling refreshed, both in mind and body, ahead of a big year of races. I’ve already mentioned the Oxfam 100 km in April, the Relay for Life Marathon in May, and the Great Red Run in June. There may be an earlier race in March too. More on that if it materialises.

Today’s photo was taken in Colorado Rockies. It looks cold, but I was running in shorts and a T-shirt. Later in the day, however, the snow started to fall in the valleys and I ended up freezing by the time I finished for the day. 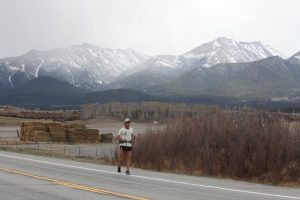 After yesterday’s drama, I had a somewhat disturbed sleep, and awoke feeling decidely below par. Regardless, I had to get out on the road.

Please note, the tracker is showing me in Uspallata, although my official run position is some distance to the west. This is because I will have no mobile phone reception until we get new Argentine SIM cards, which might have to wait until we reach Mendoza in three days time. In the meantime, I can only send the tracker position via the Wifi at a hotel each evening.