I’ve run 135 km this week, my biggest for quite some time. It’s easier to build up the kilometres when only concentrating only on long distance.

It’s three weeks now since I ran my last 300 metre time trial. I’ve been letting the slight quad strain heal, which it now has. However, I doubt I’ll attempt another sprint prior to leaving for the Tour de Bois on Friday. Then again ………

Today’s photo was taken near the Glamis Dunes in the Californian desert in the far south-east of the state. It looks a little like a circus in the desert, but was actually a set up for desert sports like quad-biking, at least that’s what I thought it was. Whatever it was, I was surprised to see it as I ran by. 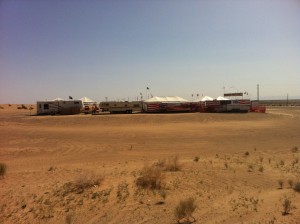 I crossed from New York State into Pennsylvania again today. It doesn’t count as a new state, though. Carmel was doing some work in the car on the stateline as I passed. A mile down the road she called to say the car’s battery was flat and it wouldn’t start. Luckily I happened to be right outside a mechanics at the time. I went inside and arranged for a guy to drive back and jump-start the car. The whole episode could have been much worse, particularly if the car had been somewhere more remote, without phone coverage.