Something a little different today. I watched a documentary a few nights ago about a town in Alabama called Muscle Shoals. This place is the inspiration for many musicians and a style of music called the Muscle Shoals sound. Many of the world’s top musicians have gone their to record songs. In fact, Mick Jagger and Keith Richards were both happily interviewed on the program about their time in Muscle Shoals.

As those who’ve read my book may recall, I passed through Muscle Shoals during my run around the world, experiencing some drama when crossing the adjacent Tennessee River. The bridge is very narrow and pedestrians are banned, resulting in me having to jump on to the rail of the bridge and hang over the water to avoid the passing traffic.

The documentary – or at least some who expressed views in it – claimed the river itself is the ‘soul’ of the place which creates the musical inspiration. For me, it was the river which provided the inspiration for me to run faster than at any other time during the world run as I sprinted across its span of a few hundred metres. Mine was a unique view of the river that few would have experienced.

Today’s photo from the world run keeps with the recent theme of snow in Arizona. Believe it or not, it was actually very pleasant running in this environment. Just down the road from here I encountered a just born calf, with the mother licking the shiny placenta from the calf’s body. 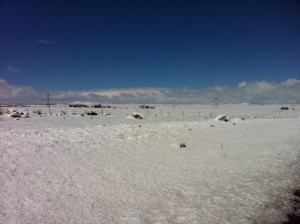 Not a bad day, despite the afternoon being wet. There was also a monster hill about half way, with a gradient of at least 20%.

I began with a run through the town of Easton in Pennsylvania, before crossing the Delaware River and entering New Jersey. This is my 22nd US state of the world run so far.

Early today I also passed 7,000 miles run in the US. I wonder if anyone else has ever run that far in the US in one year, without a single step being run over the same ground?

Tomorrow I head to Princeton, to catch up with my old mate, Craig Wallace. More on that to follow.