I’m writing this from the south-western NSW town of Griffith. In an hour or so we begin the 2015 Tour de Bois. Today’s ride entails about 100 km, passing through the town on Rankin Springs and finishing in Weethalle. The weather is perfect (we even look like having a tailwind) and everyone is keen to get started. Stay tuned over the days ahead.

One negative is that I tore a muscle down the left side of my ribs the other day and it’s giving me a bit of grief. I was lifting a mattress with my left hand as I tried to attach fitted sheet with the other. Not recommended. It’s very painful, but hopefully won’t affect me too much on the bike.

One more snowy photo from the roads of Arizona, this time as I was getting close to Grand Canyon. Today’s cycling will exhibit similar looking skies, but very different ground cover. 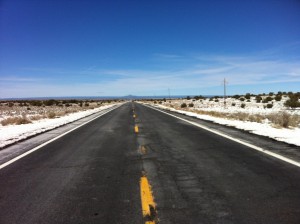 Now that the dust has settled somewhat after finishing my run around the world, and life is starting to return to normal, many of the most important aspects emerge with even greater clarity. Probably the most obvious is the role others played.

So, I’d just like to issue another general thanks to all those who did provide support in one way or another. I’ve attempted to name everyone in the past, but thanks again to those who ran with me, provided support vehicles, provided accommodation, helped with maps and other logistics, provided sponsorship, particularly Asia Pacific Digital, or who gave up their time (and money) to help as part of the support crew. You all made a huge difference.

The biggest thanks, however, must go to Carmel. She was there all the way, not only as a wife, but also acting as support crew, taking those fantastic photos that everyone is amazed by, performing the very difficult task of daily logistics (finding accommodation at times was like a juggling act while doing a triple twist with pike), attending to social media requirements and other web site issues, finding supplies for the road and ensuring all meals were covered, as well as a plethora of other smaller items that go into a successful run of this kind, including emotional support when I was doing it tough. In other words, I couldn’t have done it without her, which makes it a real team effort. Carmel was as much a part of the run as I was, and she can also consider herself to be one of the first to have driven around the world. I’m truly a lucky husband.