We’ve chalked up 200 km so far on the Tour de Bois, from Griffith, through the towns of Rankins Springs, Weethalle, and Tullibigeal. We’re now in Lake Cargelligo, heading to Condobolin today. The weather has been perfect, although a bit hot.

I’ve only been doing short runs. This morning I did a lovely 4 km run along the shores of Lake Cargelligo. I’ll gradually increase the distance as the muscle tear around my ribs improves.

Today’s photo is not from the world run. It was taken two days ago in Griffith, where the main street is lined with “orange sculptures”. There are all manner of objects formed from tens of thousands of oranges. 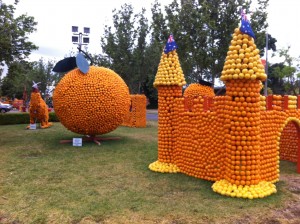 The weather was terrible, but I enjoyed the day regardless. I headed down through Times Square to Tribeca, where I was joined by Aussie Mark for part of the run. Mark is organizing New York’s inaugural ultramarathon fun run,  the MadhattanRun.com, around the island.

We passed the old World Trade Centre site, and rounded Battery Point. Mark then headed back to his office, while I ran up through China Town and Little Italy. It was then on past some of my favourite haunts from days gone by – Balthazar and the Mercer Hotel, then up past the Empire State Building, Grand Central Station, the Waldorf Astoria (where Obama and Romney cracked jokes last night), and finished what was a short day, at Central Park.