We’re all having a great time on the Tour de Bois. Last night was a classic in the town of Tullamore. The band played till 2 am, amid much red wine and pear cider. It was the first time I recall playing to an audience since Ligonier in Pennsylvania during the world run. Thanks to Anna and the staff at the pub for a great stay.

It was a well timed occasion, as I’m doing my turn as the driver of the support vehicle today. And I’m appreciating the rest. I thought Richard might have volunteered for the driving after crashing yesterday and being run over by Lamar. He’s a bit bruised and minus some skin but, like a true champion, has fronted up again for a full day in the saddle.

PS And happy birthday to Annie.

Today’s photo is from the road yesterday. That’s ‘Mother’ in the foreground. If you’ve read my book you may recall mention of this legend of the Tour. 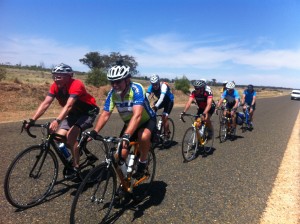 I have now officially submitted my documentation to the relevant authorities to have my run around the Earth ratified as a new world record. I’m not sure how long the ratification process will take – it could be some time – but will certainly mention it on this blog site when I get confirmation. As many know, the current world record holder is Jesper Olsen from Denmark, with 662 days. My run took 622 days.

I noticed the other day that I reached 3,333 days of consecutive running. In other words, I have not had a day without running in that length of time. No, I don’t count the days – my running log spreadsheet automatically tallies the days for me and provides a summary, which I happened to glance at the other day.

I had my annual medical check-up this morning. Although I won’t get the results of the blood test for a few days, all other indicators were very positive, including perfect blood pressure of 110/70. Running around the world must have a good effect on the body, or was it the red wine every night, supplemented with meat pies and the occasional Chiko Roll during the Australian leg?