The Tour de Bois has now reached the town of Wellington in central NSW. We head to the historic village of Gulgong today. We’ve ridden about 560 km so far. I haven’t been doing too much running because the guys have been keen to get away earlier each morning than in past years. So I just run a few kilometres before starting to ride each day. The cycling will keep my fitness up for the 12 hour race next month.

Interestingly, it’s three years to the day since Chook joined me in Connecticut, running each day through that state, Rhode Island, and on the finish of the North American leg in Massachusetts. And, coincidentally, he’s here on the Tour de Bois too, as are many others who joined Carmel and me at various times during the world run – Jeff, Michael, Barry, Richard, Quinny, Reefton Humblewood, Mother, Eric, and others.

The photo below is of me performing on Tuesday night in the pub at Tullamore. Apologies for the poor lighting. It was taken on a phone without a flash. 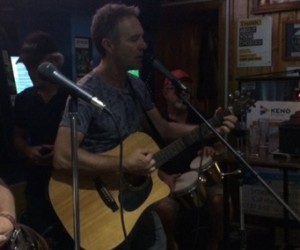 I finished the day in the town of Cromwell, where we met Chook (Roger) and Don – owners of the car we’ve had as support vehicle since being in the US. They’ve come over to see some clients, but will also travel with me during the final week of the run in the US. Chook is even going to run with me for part of each day.

Waiting to greet me at the hotel was also local Hartford resident, Charlie. He was instrumental in the very first venture capital investment in the company I founded, Oceanlinx, back in 2001. I haven’t seen Charlie for several years, and it was great to catch up. He recently rode a Harley to the famous Sturgiss motorcycle event in South Dakota. We have obviously both become more adventurous over the past decade.