Tuesday’s 31 km run has left my thighs feeling very heavy. They still felt that way today. I’ve been maintaining reasonable mileage since, which has been a bit of a chore. However, I feel confident I’m now past the worst of the effects of resuming heavy mileage after two weeks of minimal running. I’ll be looking to do a 50 km run next week, though the day I choose will depend on the weather forecast. I don’t think I’m up to a run of that length in hot and humid conditions.

Another world run photo today from my day of jogging along the southern rim of the Grand Canyon. I have plenty of these photos and have posted some before. But it’s hard to get sick of the view. By the way, it’s three years to the day since Chook and I ran through the fury of Hurricane Sandy in the US during my run around the world. 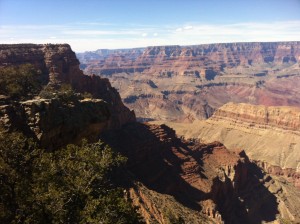