As many are aware, a few years ago I fundamentally changed my running style. I had been a heel striker, but I felt that style would not be the best for a run around the world. So, in mid 2010, I changed to being a forefoot/mid-foot striker. It took me about three months to adapt, but after that it felt very natural. I describe the process more fully in my book, The World At My Feet.

Besides helping stave off injuries, the change in style appears to have had other benefits. Yesterday I visited my chiropractor for a check up. I had no issues or concerns, but I like to occasionally get checked out, in case there might be something lurking under the surface. As I expected, there wasn’t.

Something the chiropractor usually does, however, is ‘release’ my hip flexors. These have traditionally been extremely tight, and the release process had always been very painful. But since I changed my running style, the hip flexors have exhibited no tightness at all – and there has been no pain when the same release process has been applied. I interpret this as evidence that the forefoot running style is more natural than heel striking, at least for me.

The world run photo today is of a crop in California, not far from the famed Pismo Beach. If you’re not familiar with Pismo Beach, it’s where Bugs Bunny and Daffy Duck were heading (via an underground rabbit burrow) when they accidentally emerged in Ali Baba’s cave, at which Bugs remarked “I knew we should have taken that left turn at Alba-koi-ki (Albuquerque)”. It is actually a real place, where many old movie sets were located. 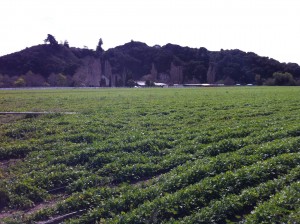 I had the unexpected bonus this morning of running on a pedestrian path above the Niagara River Gorge. It was only 5 km, but enjoyable all the same, with great views of Canada on the other side.

I have now added a fourth Great Lake to the list – this afternoon I ran along the southern shore of Lake Ontario. The water was very calm, and I was impressed with some of the waterfornt properties – understated, but stylish.

From here I will be heading toward New York City, which I should reach in about two weeks or so.

I’m also looking forward to changing my running shoes and having more padding and protection. I have just completed 2,026 km in this current pair, which is a great life for a pair of running shoes. But I am beginning to feel the road through the 3-4 mm thick soles in the forefoot.