It’s three years to the day since I concluded the North American leg of my run around the world. At just over 12,000 km, it was the longest of all my four full continental stages. The next day Carmel and I flew out for Santiago in Chile to start the South American leg.

It’s also three weeks today until the 12 hour race I’ll be running at the Icarus Ultrafest in Fort Lauderdale, Florida. Interestingly, readers may have seen the footage on television in the past 24 hours of a large Airbus catching fire on the tarmac and passengers having to evacuate down the slides. Well, that happened directly across the road from where the 12 hour race (and 24 hour, 48 hour, 72 hour, and 6 day races) will be held. I really mean literally across the road – just a couple of hundred metres away. It will be quite a distraction if the same were to happen during the race.

One last photo from the recent Tour de Bois. This was taken on a back road as we neared the town of Wellington. You can see why we love the Tour de Bois. 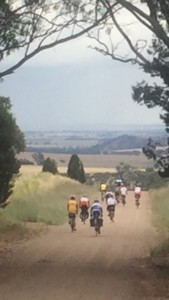 I eventually reached the town of Manchester, which is nestled on a bay on the Atlantic coast. I dipped my feet in the ocean to symbolize the end of the journey across North America, thereby ending my US leg. I have run 12,035 km (7,478 miles) in the US since mid February. I doubt too many people have done that in a single year. I have also run through 25 of the 50 states.