I have now had four consecutive weeks of lighter than average running. One of my niggles, the lower leg strain, is now healed. The other – the right heel – is still there. But that’s the same issue which has, in the past, appeared to get worse with rest. Totally counterintuitive. So, if it doesn’t get better with rest, I guess I’ll just have to run through it. I’ve started this week with a longer run than in recent times, and it hasn’t appeared to effect the heel.

The photo below was taken near Santa Maria in California. It’s close to Pismo Beach, where Bugs Bunny and Daffy Duck were heading before they took a wrong turn and ended up in Aladdin’s cave. Soon after this photo was taken (by Carmel) I did an interview with the local television station. 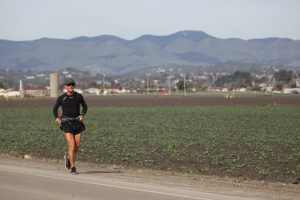 I eventually reached the town of Manchester, which is nestled on a bay on the Atlantic coast. I dipped my feet in the ocean to symbolize the end of the journey across North America, thereby ending my US leg. I have run 12,035 km (7,478 miles) in the US since mid February. I doubt too many people have done that in a single year. I have also run though 25 of the 50 states.