Last week I ran a total of 125 km. And I totalled just under 500 km for the month of September. My monthly totals during the run around the world were usually around the 1,500 km mark, so I’m currently covering about one-third of the distance I was doing during the world run. That’s not too bad, but will it be enough to prepare me adequately for the 12 hour race I’m doing in Florida in November? Time will tell.

As stated before, next week I leave on the Tour de Bois – more than 1,000 km of cycling, along with some long runs in the countryside. I think that’ll prepare me pretty well.

The world run photo for today was taken in the Californian desert, near Palm Springs. I really enjoyed my running in this region, but it was late Winter/early Spring. I’m sure I wouldn’t have enjoyed it nearly as much if it had been Summer. 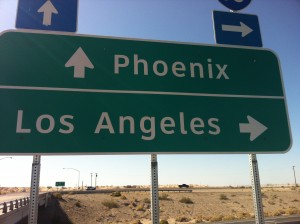 It was a a very relaxing run, with forests contantly on both sides of the canal. Many of the trees are starting to change colour, making it a technicolour experience. And the towns and villages along the canal are very quaint and picturesque.