I’ve pulled up well after the marathon I ran on Wednesday. I was quite tired yesterday, but felt fine this morning, putting in a fast 15 km. I should end up with about 130 km this week.

Next week will be a bit lighter, as I’ll be leaving on the Tour de Bois on Friday. And then the following week’s training will consist mostly of cycling. However, I do intend to do a few longish runs by leaving our overnight town early and running until the guys pick me up on their bikes. I’m looking forward to it, as remote country running is something I’ve done very little of recently – having done so much of it (around 25,000 km) during my run around the world.

And today’s photo from that run illustrates perfectly the feel of remote country running. This was taken in Arizona, not long after I’d crossed the Colorado River from California. I didn’t want to run on the Christopher Columbus Transcontinental Highway (which was about 1 km to the north), so I chose this dirt track. 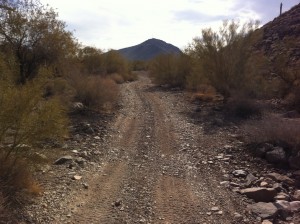 It’s a great time of year to be running through New York State. Not only is the temperature perfect, but the landscape is so colourful. The trees look like a rainbow – well, at least the lower half of the spectrum – all reds, oranges, yellows and, of course, still plenty of green. And the squirrels are very busy gathering and storing nuts for the winter.

The traffic was much lighter than I expected, which made the run even better. There were a couple of big hills, but they simply afforded me a good view when I got to the top.

And there were two milestones I passed today – 8,000 miles in total, and 11,000 km in the US. The former provides the opportunity for some song trivia. Who will be the first to name the song suggested by the following – I have 8,000 miles behind me, and over 8,000 more to go. Here’s another hint – it’s a song that I sing when I take to the highway. If you know, simply use email, Facebook, or Twitter. The answer will follow tomorrow, along with the winner. C’mon Vanessa, you should know this one.

PS The tracker is showing me a bit further to the east than my official position at the moment.