This past week I’ve been running each day in Cork, Ireland. The conference has been busy and it hasn’t afforded me much time for anything by minimal running, but I’ll get a longer session in tomorrow. I’m now in Kinsale. The last time I was here was in 2009, and I remember a great run I did through the green countryside to the west of the town. I think I’ll do that same run tomorrow.

In fact, I haven’t done much running at all since the Big Red Run. I can’t recall even reaching double figures on any individual run. Cycling 150 km each day for the past five weeks didn’t leave me much time for running. Once I’m back in Australia next week, however, I’ll start getting back into it in earnest. I reckon a couple of months of minimal running will end up paying off in terms of a rejuvenated mental attitude.

With the cycling trip over, it’s back to photos from the world run. This one was taken when I was running with Andrew Sloan, just north of Dunedin in NZ. He did 14 km with me that day. Andrew ended up helping out a lot during the remainder of the world with IT issues. 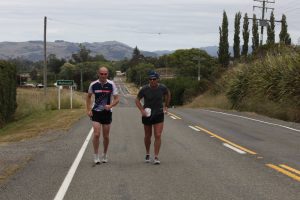