I did my weekly 300 metre sprint this morning in 47.7 secs; marginally better than in past weeks, but only just. I can’t expect to be running that distance too quickly when I’m concurrently doing long runs as part of my training for a 12 hour race. But I’m not seeing any obvious improvement. I reckon I need to get it down to 43 seconds if I’m to run 400 metres in under a minute.

However, it may actually be due to accumulated fatigue. Everyone gets tired at times when training hard, but sometimes this can build up to a point where only more substantive rest helps. I think I’ve reached that point now.

The way I can tell, as opposed to normal fatigue after a couple of hard days, is my attitude to hills. Normally I thrive on hills, looking forward to them and pushing harder up than I do on the flat or down. But I’ve noticed this past couple of weeks that I’m unconsciously avoiding hills. And when I do run them, I feel it more than usual, often struggling to the top.

The reality is, I’ve had virtually no real rest since the City to Surf, so I’m pretty sure it’s a case of chronic exhaustion. Not an extreme case by a long stretch, but exhaustion all the same. So I think I’ll take it very easy next week. And if one week doesn’t see me with a lot more energy, I’ll make it two easy weeks.

The world run photo for the day is a long distance shot of the 2,800 metre high Mt Ruapehu in the middle of NZ’s North Island, taken from what’s known as the Desert Road. 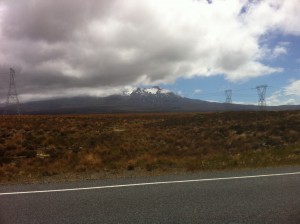 I had a great day of running, from Thirroul (where D.H. Lawrence lived while he wrote Kangaroo), up the spectacular coast and over Sea Cliff Bridge, through the Royal National Park, and finishing at Engadine.

Chips ran the whole way with me, and I was visited along the way by Jo and Kevin, old friends we originally met in Rome in 1986. Chook, Don, Wayne, and Rob also met us in the park, running the rest of the way, and then Carmel’s cousin, Patrick, also joined in for about 5 km. Chook was not going to let anyone near his record – he’s now up to 285 km.

And then, Klitty and Kevvy the Moth met us at the finish to say hello – what a way to finish a day!!

Tonight we’re staying at Jo and Dave’s, so I’d better get a move on, or I’ll miss dinner.