After two pretty easy days I decided to have a third shortish run, but to include another 300 metre sprint. Although I didn’t feel particularly fresh, the two easy days must have made some sort of difference. Surprisingly, I ran 46.5 seconds, which was 1.2 seconds better than on Friday. Extrapolated to 400 metres, it equates to 62.0 seconds.

It was a good result, although I still feel I have a long way to go before I can run under a minute for 400 metres. As those familiar with running that distance will know, one of the most difficult things to avoid is “tying up” over the final 100 metres. That has been happening to me. I could feel my legs starting to feel like lead as I approached the finish. A strong 400 metre runner avoids this awful feeling and finishes with “elegance”, as opposed to the “ugliness” I’ve been experiencing.

But today was a good sign. I just need now to knock another 3.5 seconds off today’s time, and I’ll be more confident of being competitive early next year in the Masters 55+ age group.

The world run photo for the day is another from near Taihape in NZ. You can see where the river has sliced through volcanic landscape of this, one of the geologically youngest land masses in the world. 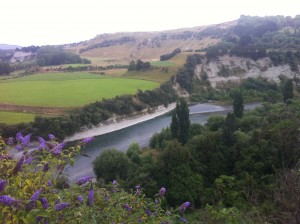