Nothing too exciting to report in regard to my running at the moment. I’m managing to cover at least 100 km each week, sometimes feeling very good, and at other times quite tired. Nothing unusual in that though.

Keeping with the theme of the last blog post, here’s another photo of me in bed on the world run, although this time I’m asleep, wearing an eye mask. I think this was taken in Chicago. I must have been tired. 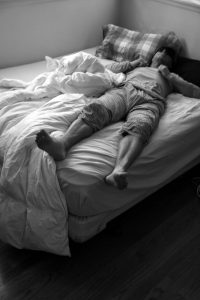