It’s “all systems go” now for my attendance at the Icarus Ultrafest in Florida during the third week of November. As mentioned before, I’ll be running the 12 hour race, which is actually the shortest event of the lot. All four current members of the World Runners Club (those whose world runs have been officially ratified by the World Runners Association) will be attending. Jesper Olsen and Kevin Carr will be doing the 6 day race, and Tony Mangan will be performing support crew duties. And I believe there will be a documentary made about our attendance at Icarus. Should be a great occasion.

On the subject of world runs, there is likely to be another person doing so soon. Serge Girard, a Frenchman, recently attempted a combination of rowing and running around the world. I don’t need to elaborate on which parts of the Earth he was rowing and which parts he was running. However, after encountering severe adverse currents in the strait between Madagascar and the mainland of Africa, he was forced to abandon that attempt. He is now seriously looking at running around the world according to the WRA rules. I assume he’ll be having a crack at Kevin Carr’s recent record of 621 days for the “Fastest”.

The photo for the day is of a nice field of flowers in New Zealand. These sorts of scenes always made the running more enjoyable. 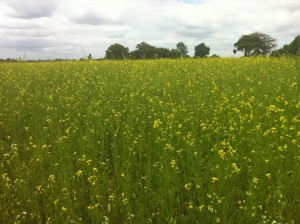 That was a great day of running!!! Perfect cloudless weather conditions, and stunningly beautiful scenery. Even going the wrong way for a few hundred metres (I’ve deducted 640 metres from the Garmin total) didn’t faze me.

It was a super hilly day, as evidenced by the 1,128 metres of ascent. That’s more than 10% of the height a jumbo jet flies at. And the hills were really steep. But I ran strongly throughout the day, which always helps me to enjoy the day.

Later in the day I passed a road sign which read Toms Run Road. Wow, and I didn’t even tell them I was coming.

As I begin the process of getting back to normality, one of my upcoming tasks will be the submission of my documentation to the soon to be established World Runners Association. If this documentation is found to be in order (and I have no doubt it will be), then my 622 days will be declared the Fastest Circumnavigation of the Earth on Foot, eclipsing Jesper Olsen’s current record of 662 days.

On the matter of the record, I have stated many times that it was not the motivation for doing my world run. Neither was it Jesper’s motivation, back in 2004/05. We both simply enjoyed the challenge and experiences of the constantly changing landscapes and cultures. In my case, raising funds for Oxfam also rated well in front of the record (BTW, the fund-raising total currently stands at over $56,000). It might sound a little strange, but both Jesper and I “took our time”, ensuring that we enjoyed our experiences. Running around the world as fast as possible was definitely not our focus.

I have no doubt we both could have set much faster times, but we wanted to have time left, during and at the end of each day, to take advantage of our adventure. This included days off. I have no doubt now that, if I was concentrating solely on the record, I could set a much faster time than 622 days. In fact, without the breaks I took, it would have taken me just 525 days this time. It would not take much extra effort to cut that to under 500 days.

For this reason, I consider the record to be quite “soft”, and I expect it to be slashed considerably in coming years. As I said, even I could slash my record considerably, if running around the world as fast as possible was the motivating factor. Someone will, if that is their motivation, but I’d hasten to warn them, they won’t enjoy it if they don’t take time to “stop and smell the roses”. After all, this is what a world run should be about.

I am currently running only about five to seven kilometres per day, but at a much faster pace than I have been running this past twenty months. I am also looking forward to the remaining footy finals. Not only are my Rabbitohs just one win away from their first Grand Final appearance since 1971, but the team I used the to play for, the Warilla Gorillas, are playing in the South Coast Grand Final this Sunday at Nowra Showground, and I will be in attendance. The last time the team played a GF there, which I was at, was in 1978, and they won that one. I hope I haven’t jinxed either the Gorillas or the Rabbitohs by mentioning them – neither has fared well after past mentions in my blogs. (19/09/15 – I did jinx them, with both losing).

Finally, many people have expressed a sadness that they don’t have the daily update to look forward. If so, there are three other runners you might like to follow – Tony Mangan on www.theworldjog.com, Kevin Carr via hardwayround on Facebook, and Christophe Vissant on http://www.christophevissant.fr/?page_id=58&lang=en. I expect Kevin will be the first to better my new record when he finishes his world run in early 2015.