Despite being very busy these past several days, I’ve still managed a decent running mileage. I’ll again manage over 100 km this week. At some point I’ll need to have an easy week. Perhaps next month during the Tour de Bois. More on that in the days and weeks to come.

Having watched some of the Sydney Marathon last week, including getting a good look at the leaders, I was interested to see the winning time was a 2:12, with several others not too far behind. Very impressive. I wouldn’t have thought it was that fast when they went past me. At least now I know what 2:12 pace looks like up close.

Here’s a photo of me suffering in the heat of Argentina in early December of 2012. I was getting very close to Buenos Aires when this was taken, and only a day away from the infamous dog bite. 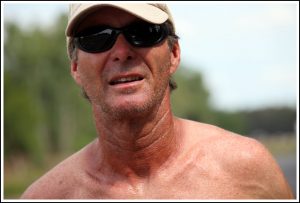