There’s only seven weeks now until I leave for Florida for the Icarus Ultrafest and the 12 hour race I’ll be doing there. Given I’m in pretty reasonable shape already, that’s plenty of time to fine-tune with some very long runs. However, it’s not that simple.

Two of those weeks, right in the middle of the seven weeks, I’ll be on the annual Tour de Bois cycling trip. This year we’re riding in country NSW, from Griffith to Mudgee – one wine region to another, although the landscape in between will be somewhat remote. And some of us will be starting early by riding from Goulburn to Griffith. That will make the trip close to 1,100 km in total.

However, the very act of riding for six or so hours each day, even at the leisurely pace it is, will help me develop additional stamina for the 12 hour race. And, on top of that, I’ll probably do what I did during the Tour de Bois rides in the years leading up to the run around the world – run some of the course instead of riding. I will set out early in the day, while the rest of the guys are having breakfast and preparing for the day. When they finally catch me – often not until I’ve already covered around 40 km – I change into my cycling gear and get on my bike (which has been transported to me in the support vehicle). Half a day of running and half a day of cycling – great training.

The last photo I posted was of sea lions, just south of the town of Watsonville in California. A few miles further on I came upon this field of artichokes being tended by Spanish speaking workers. It was a beautiful day for running and one of my favourites from the run around the world. 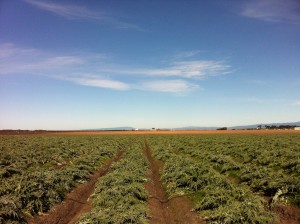