Yesterday I ended up with 23 km in total after meeting Tony Mangan late in the afternoon and accompanying him through to the end of his day (which finished in the dark). Both Kate Day and my cousin, Karen Ryan also accompanied Tony yesterday. Karen and Kate, you may recall, did a lot of running with me as I neared Sydney on my world run back in 2013. They were the two “highest mileage” females of my entire run.

Today I’ve already run over 23 km, as I move the car up the coast and run and back and forth to Tony. I’ll probably end up with nearly 30 km for the day.

It’s been a lot of fun, and makes me almost feel like I’m back out on the road doing a world run. It was also nice sharing a few beers and conversation about world running with Tony last night. I’m sure we’ll be doing the same this evening in Heathcote.

Here’s a photo of Tony at Stanwell Tops, where we had lunch today. That’s the Pacific Ocean you can see on the left, with the city of Wollongong way in the distance. Tony still had about 18 km to walk after this. 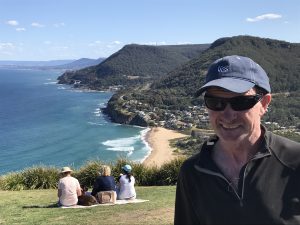