I was recently invited (and accepted) to be part of a team that is running around the world ‘virtually’. It’s in an event called the Circumpolar Race Around the World (CRAW). Teams of ten log their daily mileage into a web site, which then shows on a map where you’d be if you were covering that mileage in the real location. Our team is somewhere in Mexico at the moment. It’s a bit of fun. I’ll be interested when our virtual route crosses my real route around the world.

And I’m always interested when the Tour de France crosses my round the world route. In fact, it has mimicked part of my route these past two days. I really like watching the TV coverage when they show ordinary houses on ordinary roads and I say to myself, I remember that place – I was thinking of ‘such and such’ as I ran past there. Last night the tour passed through St Affrique. We stayed there during my world run, and on two other occasions when I was cycling in France. We now have friends, Laurence and Stephane, who we have stayed with on each of those three occasions in their wonderful B&B, Domaine du Vern.

Today’s photos include me running up the main street of Yass in NSW on this day in 2013, ‘breaking the tape’ in the little town of Binalong, and then saying hello to a few of the locals at the pub in the same town. There’s also a few shots from my time in Kentucky a year earlier. 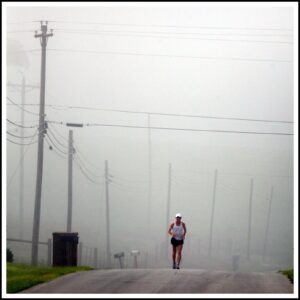 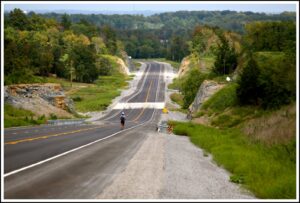