I’ve been taking it easy these past couple of days, ahead of a 50 km training run tomorrow. Sometimes it’s useful to go into a long run somewhat fatigued. But that’s not my aim this time. I want to be reasonably fresh so I can push harder than I would if I was training simply for, say, a multi-day world or continental run. This time I’m training for a single 50 km effort on April 30. That means a more solid run tomorrow, followed by a couple of days of easy restful jogging.

My latest article for Azumio has been published. You can read it at : http://www.azumio.com/blog/fitness/speed-work-benefits-and-pitfalls

The photo for the day sees me running through Prague during my world run. This is a great city to visit, and I’d recommend it to anyone travelling to Europe. This photo was taken right in the middle of the city. 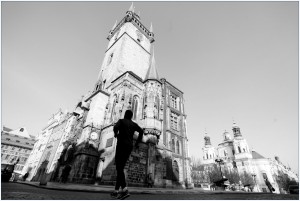