Today’s post is from northern New Mexico, with a video shot in Taos. Enjoy.

I knew that today I was in reach of the 5,000 km milestone so far for the world run. The weather, however, made me work very hard for it. More on that later.

I began in quite good conditions. My starting point was right next to the place where Billy the Kid was jailed for three months in 1880/81 while awaiting trial. He was found guilty of murder, but escaped when transferred to another jail. Pat Garrett subsequently tracked him down and shot him dead. It’s strange to think that Billy ate, breathed, and slept just metres from where I headed off from.

It was also great to run on both the Sante Fe Trail (the precursor of Route 66), and the Camino Real (the Spanish Royal Highway), which was the main highway that linked Sante Fe in the north with Mexico City in the south. Sante Fe was founded in 1607, and this highway must have seen some amazing traffic since then.

About an hour into the run I passed through Tesuque (pronounced Tess-oo-kee). This quaint village is where Murray Gell-Mann lives. I guess most readers won’t know who Murray is – he is the guy who discovered quarks, the sub-nuclear particles that make up protons and neutrons. Naturally, he is one of the most famous physicists in the world. Now you know.

Another couple of hours up the road and I passed the turn-off to Los Alamos. This is where, in the early to mid 40s, the atomic bomb was developed. After 1945 the facility moved away from weapons research, and is now one of the greatest hot-beds of peaceful scientific research in the world. All sorts of people have lived in or visited Los Alamos, including Einstein and Oppenheimer.

Just after this, the wind started to increase in intensity, as predicted by the weather bureau. My last 10 km was run in gale-force freezing conditions, and all I had on was a T-shirt and shorts. During this time I rolled an ankle quite badly, while keeping a close eye on a vicious dog that was trying to attack me from behind a wire fence. Luckily, the injury wasn’t bad enough to prevent me continuing, although I did need to take a few minutes break to let the pain subside.

I was so pleased to be picked up by the support vehicle. I vetoed any photos on the road, in favour of immediately hopping into the car.

But not before I reached my 5,000 km milestone. I’m pretty happy with that, as the (slightly less than) three and a half months it’s taken me is well ahead of my original schedule. Now for 10,000!

Another cold-ish day, with a little bit of snow falling at the higher altitudes, but hardly enough to warrant a mention. It was only the second time I’ve climbed above 2,300 metres in elevation on the world run, reaching nearly 2,400 metres (8,000 feet) at my highest point today. I also experienced my highest finishing point for any day, with 2,369 metres.

I began the day in Taos, which I had not realised was the home of so many celebrities. We met some very nice locals at dinner last night, and they informed us that Taos is home to Julia Roberts, Lauren Hutton, Lynn Anderson (who had several hits in the 70s, including I Never Promised You A Rose Garden – who remembers that one?), and was once the home of Dennis Hopper. And I thought it was a quaint but unknown village. I found out later that it was also the home of Kit Carson in the 1800s. I’m not exactly sure who he was, but I’ve heard the name. One thing I’m sure of – he wouldn’t have been as good a cyclist as Kit Rumsey.

As mentioned, my finishing point today was my highest yet, and it was in the shadow of Wheeler Peak, the second highest mountain in New Mexico at 13,161 feet (almost 4,000 metres). Tomorrow I head into Colorado again. I have a feeling I’ll be climbing even higher.

PS Although I don’t have reception for the tracker, I have managed to get it updated via the wireless network at the hotel. However, my official run position is actually 8 km further north of where the tracker is showing me. 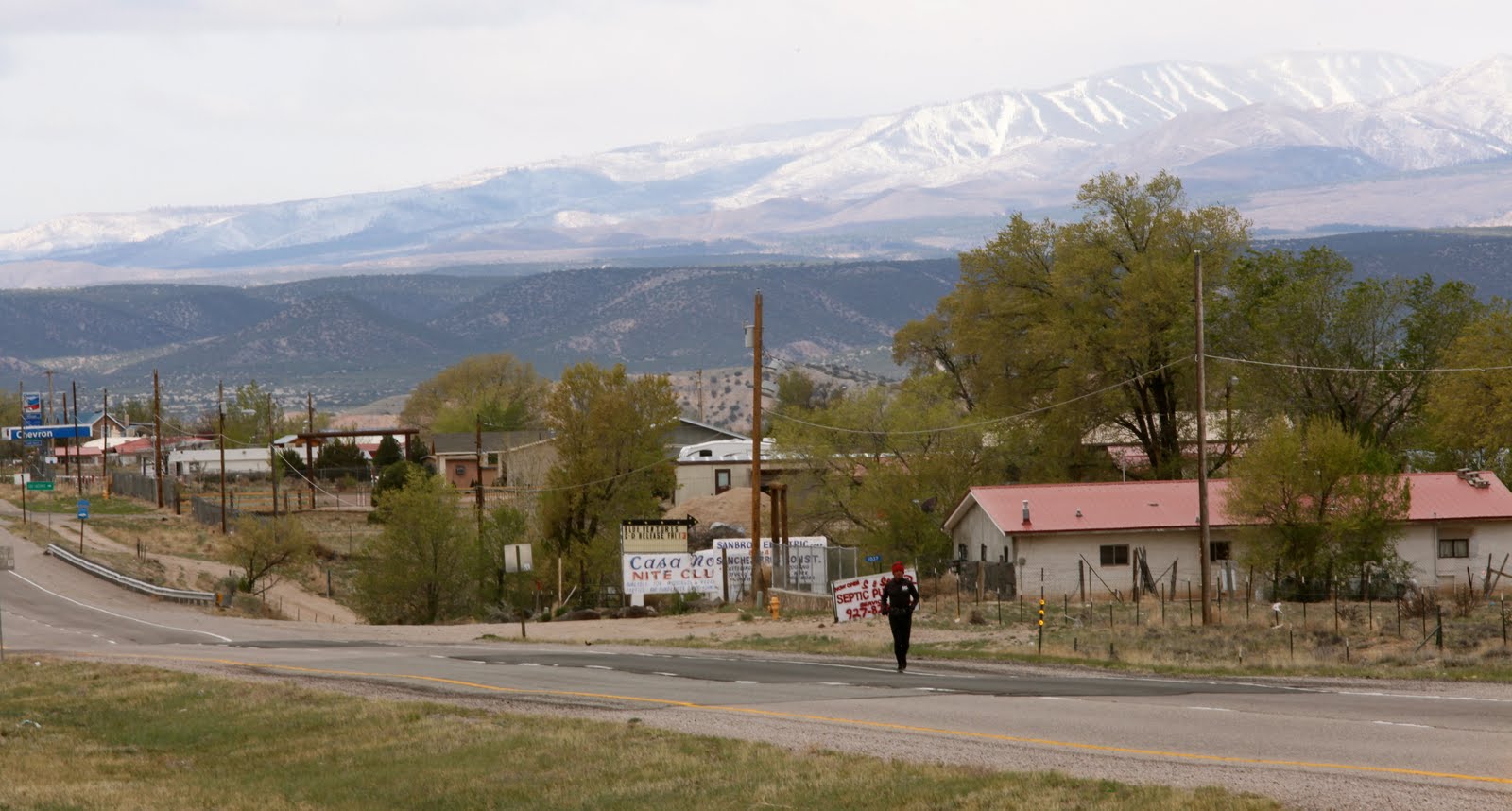