On Friday I submitted a request to the City Surf organisers for a preferred start position in this year’s race. I am again going to try to “beat my age”, an endeavour where one attempts to run the race in less minutes than their age in years. To do so I will need to beat roughly 54:28, a time I’ve run faster than many times in the past. However, it gets a bit harder every year. Could this be the year? Perhaps not, but I reckon I’m at least a chance. It will  probably be easier in the next two or three years, but I’m going to have a go anyway. And I’ll need the less congested preferred start if I’m to be successful. With 80,000 starters, I’d have no chance if I start back in the pack.

There has also been some talk within the World Runners Association about a super long running race. Jesper Olsen favours a 10,000 km race on a loop circuit. My preference is for a stage race, like the Tour de France of running, held over perhaps three weeks and 1,000 km. Neither may ever happen, as they’d both take an enormous amount of organisation. Time will tell if such a thing ever gets off the ground.

Today’s photo is one I took in the Colorado Rockies – a really great place for running, riding, or anything else you’d care to do, for that matter. This photo was taken almost exactly three years ago. 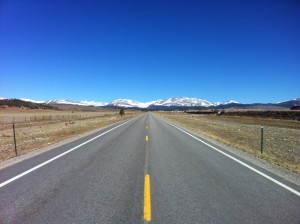 I’m gradually making my way through the Rockies to Denver, but the geography of the mountains requires a more convoluted route than I might otherwise have taken. While the rules for a world run stipulate a predominantly easterly direction, it does allow for temporary westerly courses for geographic and logistical reasons, as is the case for me at the moment.

However, although it’s allowed, I find it very difficult, mentally, to run west – it seems like I’m going backwards. Anyhow, the westerly aspect is over now, and I head north tomorrow, then east towards Colorado Springs.

Today’s run was a little shorter than normal. I felt a little below par in the stomach during the middle of the day, but this improved in the afternoon. Just as I got into the town of Monte Vista, a strange combination of snow and hail began to fall. It was the icy equivalent of a sun shower, lasting just a few minutes, while the sun shone on.

Once again, the tracker is showing me not quite in the correct location. My position is actually a few kilometres north of the centre of Monte Vista.

I chalked up a couple of milestones today. It was my longest run in more than a year – since April 3, 2012. I have also now passed the 75% mark of the run. Only one-quarter to go.

But I wasn’t the only one to achieve something today. While The Hud ran 20 km with me, Dave broke Chook’s record for the furthest anyone has run with me – he did 39 km today. Chook won’t be pleased, but he still holds the record for the greatest cumulative distance, with over a hundred kilometres.

Last night we met a local ex-Scot, Don Dawson, and his 17 year old daughter, Yolanda. Don is a very keen ultra-runner, and will be doing a 55 km race tomorrow. Yolanda had just finished 8th in the Hungarian national cross-country championships yesterday. She was very pleased.

This morning, Don came out and ran the first 8 km with Dave and me, before running back. It was good to get some inside knowledge as to the quietest route to take. The pace was a bit slow for Don, but it will do him good, given his race tomorrow.

It was a very long day into Budapest, but it was worth it, as it will give me more time to enjoy and explore the city. The temperature reached 31 C, according to my thermometer – such a contrast to recent months.