It’s unusual for me to back away from a planned training session. Today I was going to do a time trial around Centennial Park. However, yesterday I strained a muscle in my lower back and it’s been very painful this past 24 hours. I decided it was very unwise to try what I’d planned, so I just ran some fast shorter bits, essentially as an easy fartlek session. Better to be careful at this point in time.

Otherwise, every thing is going well. The back strain will clear up in a day or two. I think it was brought on by my fall on Saturday. My previous hip injury (from the bike crash in March) started to hurt, and I think I compensated by using muscles I don’t normally use. This probably led to fatigue in the back muscles. All the more reason to take it easy for a little while.

And it’s a happy birthday to my old mate, Tony Mangan. Tony is currently in Poland on his walk around the world. Have a good day, Tony.

This is what my feet looked like on a daily basis when I was running through Germany during my world run. My feet were wet and freezing within minutes of starting each day. Strangely, though, it didn’t bother me too much. It was much worse running in 60 C heat. 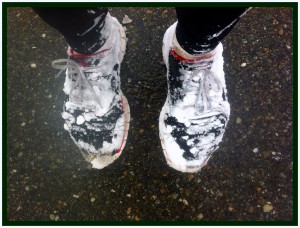 That said, I was certainly pleased to get into town this afternoon and out of the wind. The motel does not have internet, so I’ve headed down to a bakery. This is where the tracker position is indicating I am, which is not too bad, seeing as my official run postion is only just up the road a couple of hundred metres.

I ran a shorter day, to balance out the long one yesterday. Once again, the weather was spectacular, with a top of 27 C and an average of 23 C. And not a cloud in the sky.

The boys ran a few kilometres with me through Budapest this morning, and then I headed off on my own. Heading out of the city wasn’t as bad as I had expected. The traffic was quite heavy, but I always had somewhere to run that was away from the cars. The second half of the day was on flat country roads. Dave came and picked me up, and we commuted back to Budapest.

You’d think the plants are trying to make up for the late start to spring. They seem to be growing so fast, and each day the vegetation looks more and more lush. After all, it’s perfect growing weather at the moment.

Tonight is our last with Jo, Dave, Sue, and Greg. It’s been great having friends along for the past week, and running with others has certainly provided a great mental break from all the time alone on the road. But it won’t be too long before we see them again in Australia.