I’ve pulled up without a problem after my little foray into the world of speed yesterday. Not that 3:54 per km is particularly fast, but I guess it depends on to whom you’re speaking. I’m now very enthusiastic about the possibility of “beating my age” at the City to Surf. I just have to make sure I don’t get carried away and run myself into a break down again.

On this day three years ago I left the town of Fairplay, Colorado, having run into the town the previous afternoon. For those who don’t know, Fairplay is the town on which the cartoon series South Park is based. You can read more about the day below in the On This Day section. And today’s photo is from Fairplay, which now openly promotes itself as South Park. 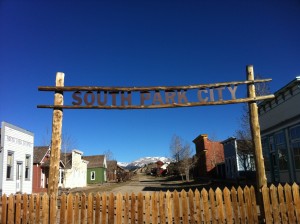 I’ve had lots of questions and requests about maps of my route. If you’d like to see either where I’ve run so far, or where I plan to run, just click on the Journey tab on the menu bar. The remaining course can be viewed by clicking on the link at the bottom of the section.

I’ve also had many questions pertaining to when I’ll be passing through Denver. If you’re interested, stay tuned to this site for updates, but the best estimate at the moment is around April 30. Anyone wanting to come out and run with me, you’re most welcome. I should have T-Mobile reception again by then, so the tracker will be working constantly, and you’ll be able to pin-point my position throughout the day.

Perhaps we’ve just been lucky so far, but I am tempted to say that the Serbian people – at least those we’ve experienced so far – have been the friendliest yet of any we’ve  met on the world run. That’s saying something, as most people have been very friendly. Let’s see how that pans out over the next week or so.