I’ve been away for the weekend, one benefit of which is that I was able to enjoy running in less usual locations. On this occasion it was along the beaches and headlands of the south coast of NSW.

After the successful experiment with a bit of speed last week, I thought I might try again in the next day or so. This time I think I’ll have a go at a 3 km time trial. Stay tuned for the outcome of that one.

My book about the world run is due to go to the printer early this week. Exciting times. Everything is finalised, including the addition of 64 of Carmel’s magnificent photos. Only two months till it’s in the book stores.

Today’s photo is from fairly early in the world run, when I was traversing the stretch of Californian coastline known as the Big Sur. As you can see, it’s very panoramic, and a lot like the coast south of Sydney near Stanwell Park. 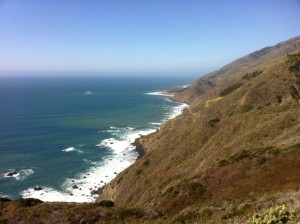 The latter part of the morning was a steady climb of 500 metres, much of it through a lovely forest. At the top of the climb I exited the forest into an exposed area, only to reaslise there was a gale blowing (the forest had totally protected me from the wind).

Quite a different run today. I was met on the road this morning by Simon and Greg, who had flown in to film a piece on my run for the Nine Network. It was an interesting and novel way to get through the day, with various footage recorded in towns, villages, and in the open countryside. Anyhow, I won’t go into too much detail here, as I’m sure you will get to see the real thing eventually – either on TV or later on this site (see the video at the top of the Home Page).

It was another hot one, with a top of 32 C (90 F), and more cloudless skies. I felt the heat got to me a little today – I have certainly had easier days. But, with my mind taken off these issues by the filming, it ended up easier than it might have been.