Just some easy running these past few days, in the lead up to the 50 km I’m doing on Saturday. Nothing much to report on that front. However, in the very near future I have a major announcement to make about my next challenge. No, it’s not about another world run – it’s far more from left field than that. I’ll announce it some time very soon, so stay tuned.

Here’s a lovely photo from the western part of the Czech Republic, taken in early April 2013. The church steeple in the background is very Russian-esque. I think I reached Prague the next day. 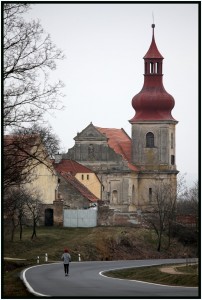 The latter part of the morning was a steady climb of 500 metres, much of it through a lovely forest. At the top of the climb I exited the forest into an exposed area, only to reaslise there was a gale blowing (the forest had totally protected me from the wind).

However, as I descended again, I picked up a bit more cover from the rolling hillls, and the conditions became more pleasant. The last part of the day reminded me a lot of the region between Neville and Newbridge, south of Bathurst in New South Wales. Admittedly, there was a lot more traffic, and I was three times higher in elevation, but the landscape was very similar to look at.

It was another hot one, with a top of 32 C (90 F), and more cloudless skies. I felt the heat got to me a little today – I have certainly had easier days. But, with my mind taken off these issues by the filming, it ended up easier than it might have been.