After running the Oxfam 100 km event last year, I began a speed work campaign ahead of the City to Surf in August. My first foray into speed on that occasion was a 3 km time trial on May 22, which I ran in 10:59.

Today I thought I’d have another go on the same course. I’m pleased to say I ran it in 10:52, and it felt more comfortable than I remember it being last year. That’s an average of under 3:38 per km. My actual splits were 3:45, 3:37, and 3:30. The last kilometre hurt a bit, but I recovered pretty quickly afterwards.

I then ran the same course again on June 11 last year in 10:56. It wasn’t until July 1 that I ran it faster than I did today. On that occasion it was a 10:45. So, it would appear I’m ahead of where I was last year by about six to eight weeks or more. I now have to turn that into a good time in the City to Surf (and the Sutherland to Surf lead up race). My aim is to get to as close to my “age” as I can, possibly even “beating my age”. As mentioned previously, that would mean a City to Surf in 54:27 or under.

Today’s photo is from a day on the world run in Arizona, just out of Prescott, when I was surprised by a snow storm from the day before. However, it made for very pleasant running once the storm cleared and the sun came out. One definitely needs sun glasses with the combination of a full snow cover and bright sunshine. 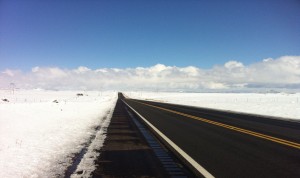 As the day heated up (and I discarded my jacket – picked up by the support crew), so did the traffic. As I approached Denver, the country roads I was on gave way to suburban roads, and that’s never a particularly pleasant environment in which to run. Perhaps it was the less stimulating surroundings, but I certainly did it a lot tougher this afternoon than I did during the morning.

Belgrade was abuzz, especially for a Sunday morning. There was activity of all sorts, including lots of traffic on the road. It was a tough run, and the 35 C (95 F) temperature made it harder than normal. It was also a lot hillier than the past couple of weeks has been.