This week I ended up covering 125 km. But I had a bit of a scare yesterday. After a long one on Friday, yesterday was a relatively short and easy run which started out fine. But a few kilometres in I began to feel a soreness around my left heel. A little later my calf started to spasm. Then I felt a stabbing pain around my left Achilles. At that point I decided to walk home. Luckily it was only a little over a K by that stage.

Today, however, it felt perfect. I only did a short and slowish run, but I couldn’t feel the problem at all. I had intended to do a big speed session tomorrow, but I reckon that would be very unwise. I’ll take it fairly easy for a few days until I gain enough confidence that the issue has disappeared. I suspect it had something to do with the fact I had several meetings to attend during the week and spent a lot of time standing and walking in hard soled business shoes. On top of that, my running shoes are particularly worn and need replacing – something I’ll do this week. I’m sure I’ll be fine this time next week.

Today’s photo shows me running in Spain, to the west of Madrid. You can see a freeway just above me, with me running on the gravel service road next to the freeway. The lovely snow capped mountains provided a pleasant background to the run that day. 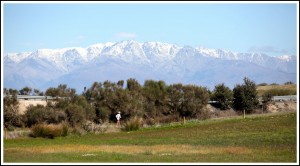 I managed to cover a big 63 km, but it was the climbing and altitude that added the spice to the acheivement. Both the ascent (1,524 metres of uphill) and the maximum elevation of 2,566 metres, were records so far for my run around the world. I actually got within 80 metres of the elevation of the Col du Galibier in France, the third highest pass in Europe, and one of the toughest climbs in the Tour de France.

All this was done in reasonable weather conditions …… until late in the day (although it did snow quite heavily at one stage during the ascent). About 5 pm it started snowing heavily again, but this time it got really cold. The snow persisted for so long that I ended up totally soaked, and that’s when things get nasty. The combination of being soaked when the temperature is below zero results in rapid hypothermia. It’s amazing how, when your fingers get that cold, there’s not a thing you can use them for – they lose all strength and are completely useless. Even putting gloves on requires a Herculian effort.

But it all ended well, with a nice hot bath, and a lovely dinner cooked by Libby.

We had a great meal last night in the town of Ramspau. I had a steak that was as good as any I’ve had anywhere. I don’t eat much red meat at home, but find I need it more regularly on this run. Carmel’s schnitzel was equally as tasty.

The lovely woman who served us was the spitting image of the Australian Governor-General, Quentin Bryce. They looked so much alike, that when we showed her some photos of Quentin Bryce from Google, she gasped in amazement – it was like looking at herself in a mirror. It was appropriate that this happened in the country that gave us the word ‘doppelganger’.

If I didn’t know better, I’d have thought that today was the on-set of winter, with the previous few weeks representing autumn. It was bitterly cold, with the wind chill making it even worse. If there had been any precipitation, it definitely would have been in the form of snow.

Despite this, though, I had a good day, with a lot of running on cycle paths, including one section on an old rail trail through a pine forest. Earlier, I was on a quiet road that had one of the steepest sections of the world run so far – there was a 750 metre section with a gradient averaging 17% (according to a road sign), but I estimate one part was as much as 30%.

I’m enjoying having Skype on my phone, and I gave my old mate, Klitty, a call today. I expect to see him on the road during my Australian leg in a few months.

It was a very hilly day, with the biggest hill of all saved for the last 7 km. My feet didn’t appreciate the long downhill to the finish, in the unusually named town of Oberviechtach.

Carmel struggled again to find accommodation, with some conference on nearby. She was eventually successful with the sixth hotel she tried – poor thing!!!