Once again, my foot and my legs in general, felt great today. Saturday’s problem seems an eternity away. I already mentioned that I suspect it was caused by spending a lot of time last week in hard business shoes – something I haven’t done for several years. I was also wearing old shoes for running.

In fact, I’ve been alternating between two pairs of shoes for more than a year now. Each pair has seen more than 3,000 km. I’ve had no problems doing this. I know, I know, every shoe manufacturer tells you to change your shoes after 500 km, but that’s definitely too early. Then again, 3000 km is getting pretty extreme.

Anyhow, I wanted to make sure the shoes weren’t contributing to the problem, so I went to my wardrobe and looked to see what I had in there. I decided to try the very same pair I wore over the final 500 km of the run around the world – the pair in which I crossed the finish line at the Sydney Opera House. I’ve probably run a few hundred kilometres  in them since, but the total distance for this pair of shoes is less than 1,000 km.

And you know what – I’d forgotten how comfortable they are. They’re the best running shoes I’ve ever had. They are essentially the same shoes as I wear now, but design changes over the past three years have been retrograde. The old pair are better than what you can buy now. I’ve felt great in this pair from 2013 and have decided to wear them for a little while yet. Why wouldn’t I, when I’m running so comfortably in them. Whether they’re the reason the heel problem disappeared so abruptly, I’m not sure. But it’s possible.

Here’s a photo taken by Carmel as I ran past the chateau at La Rochepot in the Burgundy region of France. We’d visited this place in 2009 on a cycling trip and loved it then. Just down the road is the town of Nolay where we stayed on both occasions. The city of Beaune is nearby too. 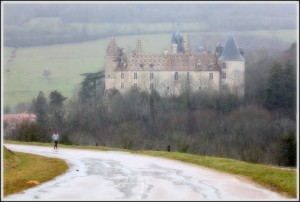 The tracker was working early today, but it has not registered the last 10 km or so. I am actually further down the road than it shows. I suspect I may not have any more tracker updates for a couple of days now.