I will shortly be heading off to Canberra for the Anzac Ultra. The mandatory race briefing will be conducted this afternoon. The race starts at 8 am tomorrow morning. I’ll attempt to update readers via Twitter (@tomsnextstep) during the race, although these tweets will also be posted in the upper left margin of the web site (www.tomsnextstep.com).

My main Garmin device usually lasts about 15 hours, though I think it’s a bit less these days. This will definitely not be enough to last throughout the race. Therefore, I will supplement it with a Garmin watch that I used briefly during the world run. I’m hoping I’ll finish before that also runs out so that I have proper records of the whole race that I can later post for others to view.

I am hoping that Kevin Carr will have finished his world run just prior to my start, so that I can congratulate him on his accomplishment. He should be finished around 8:30 pm UK time, which is 5:30 am here. Try to send Kevin a congratulatory message on Facebook, if that’s your preferred mode of communication. You can access his page via his web site on www.hardwayround.com.

It seems that many readers enjoyed seeing the photo in yesterday’s post. I’ll try to post other photos from my world run from time to time. Here’s one of me running as I passed by Niagara Falls. I’m the person closest to the camera in the middle ground. 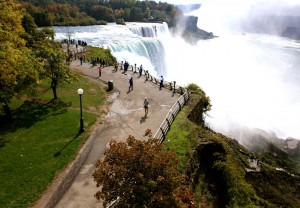 As you will see from the new video at the top of the page (not in this post), the Albuquerque TV station, KOB 4, aired a story on my run on last night’s news. I like the way the footage focuses on the actual running. You can see how slowly I make my way during this adventure.