I should end up with around 125 km this week – another good one. I intend to do a very long run next week – probably 50 km. And I’m looking forward to the 50 km ‘race’ on April 30. I should be reasonably fit for it.

Don’t forget to follow both Serge Girard on www.sergegirard.fr and Tony Mangan on www.myworldwalk.com. Both are doing very well on their respective world run and world walk. Serge continues to pump out days of around 72 kms, while Tony has walked days of nearly 50 kms.

Today’s world run photo is from somewhere in Europe, but I don’t know where. I suspect it was somewhere in Spain or France. The bridge is very ancient. 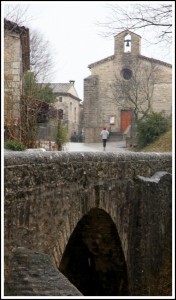