I had my final longish run this morning ahead of next week’s City to Surf. It was only 20 km. I don’t want to overdo it, as I feel I’m bordering on over training rather than under training. Strangely, after feeling extremely sluggish on Wednesday and Thursday, my legs had plenty of zip yesterday. You just can’t pick it!!!

I had a nice lunch on Thursday with some of the people from Allen and Unwin, my book publisher. The feedback I’m getting about the book has been more positive than I expected, so if you haven’t already acquired a copy, please do so and let me know what you think.

Today’s world run photo is another from the Garden of the Gods, just west of Colorado Springs. Well worth a visit if you’re ever in that region. 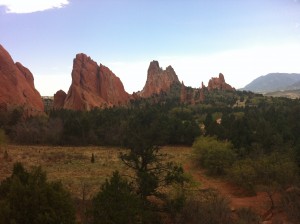