Only two days now until my 12 hour run. In fact, in 48 hours time I’ll already be four and a half hours into it. I’m taking it very easy until then, with just some light running. When I was younger, I always felt pretty fresh within a few days of beginning my pre-race taper. These days I still feel sluggish with some leg soreness even up until the day of the event. I’m not sure if that’s age, or if it’s because the volume of running I do these days is greater than I used to do (it used to be shorter but faster running). Anyhow, I know that I’ll be OK on the day.

As for the day itself, I will get Kate to send regular tweets on my phone. These will show up on the run web site (www.tomsnextstep.com – for those who normally follow on Facebook, you’ll need to look on the web site instead). Those who are interested will then be able to follow my progress.

The photo below was taken in the Colorado Rockies, near Estes Park. I was running with locals, Lisa and Terry, at the time as I made my way down the range that day and into the town of Loveland. 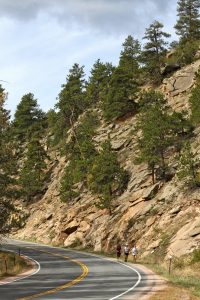