Still not a lot of world run photos from around these dates in 2012 and 2013. As previously mentioned, Carmel was back in Sydney in 2013 and we were both back in Sydney for a short time in 2012. However, by August 20 in both years it was back to normal. So there’ll be a lot more photos and videos in the next blog post.

I do have a couple of photos from this time in 2013. Between the towns of Penshurst and Mortlake in western Victoria, I was joined by a local dairy farmer called Clare. She was training for a trail run all the way to Western Australia. I think Clare ran a total of 32 km with me that day, and her niece and nephew joined us for about 9 km. The kids’ mother, Georgina (Clare’s sister) took the photos that day. 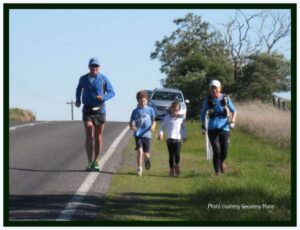 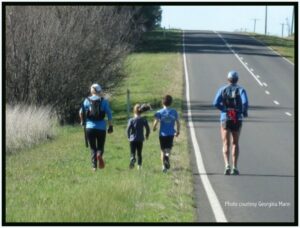