I’ve been in Hobart (Tasmania) for work these past two days, which provided a very nice change of scenery for my daily run. Not that I did very much running, as I’m still taking it easy after Friday’s 114 km. But Hobart is certainly one of the more pleasant cities in which I’ve had the pleasure of running.

On the subject of that 12 hour run, it’s worth noting that my good friend and fellow world runner, Tony Mangan, is an old hand at 48 hour runs. In fact, he still holds the world record for 48 hours indoors and on a treadmill. His indoor record is worth comparing to my (much weaker) effort last week. Tony covered 426 km in 48 hours. That’s an average of 106.5 km each 12 hours, for four of them in a row. So I only managed 7.5 km more in a single 12 hour run than Tony averaged for each of four back-to-back 12 hour runs. I guess that’s why he holds the world record.

Back to an old favourite for today’s photo. Here’s the classic  photo from when I passed through Monument Valley and the girls dressed me up as Forrest Gump, minus the entourage of followers. 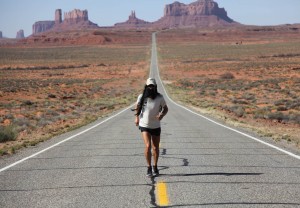