I’m still taking it easy after last week’s effort. Although I feel fine, it takes longer than you think to recover from a 100+ km run. After the Icarus Ultrafest 12 hour last November I was running pretty well, then ten days after the race I suffered a calf strain which took two months to come good. I don’t want a similar thing to happen this time. I have a small twinge on my right Achilles. While it’s nothing to worry about, it is something to be careful about.

On a different but related issue, I’ve attached a document below about sleep. Have a look at it. Some people reckon sleep is overrated. I don’t. Sleep is crucial to long term well being, including athletic performance. We often don’t get enough, and it soon starts to show. One of the best things about running around the world was that I slept so well. If I hadn’t, I reckon my body would have broken down at some stage.

Back to an old photo for today. This was taken in the Royal National Park, south of Sydney, during my Melbourne to Sydney run in 2009. It was the fact I enjoyed this experience so much which led to me deciding to run around the world. 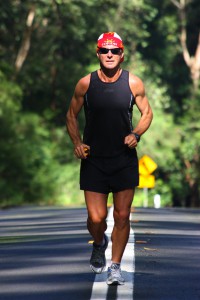 The weather improved a bit today, although it was very cold at times. Despite the rain threatening for much of the day, I essentially remained dry.

Jeff ran the first 16 km with me, through forests on dirt roads. We hardly saw a car. The hills and dirt, however, ensured it was slow going.

The rest of the day was quite hilly, through lovely countryside on very quiet roads. I was greeted at one stage by three goats, five sheep, a black calf, and an alpaca, all of which coexisted in a small field. They ran up to the fence to meet me as I ran by them. It was cute to see how they were all good friends.

Carmel has now arrived back, and Michael has headed back to Melbourne. He has done an amazing job, and I couldn’t have continued without him.

Finally, I was quite disturbed by the news of the murdered Australian in the US, shot by bored youths as he jogged along the highway. This could so easily have been me, given the amount of time I spent running on US roads last year. I guess I was lucky, “dodging a bullet”, so to speak. I feel much safer running in Australia, where we have very strong gun control laws.