Until yesterday my legs had felt heavy since the City to Surf, with no zip in them at all. Then yesterday, and this morning too, they felt full of energy. Admittedly, I had been running in training shoes, and yesterday I changed to racing shoes (training in racing shoes is not an issue for me these days, since I changed to forefoot running). But it’s hard to believe the change of shoes has led to such an improvement. I guess I just reached that stage where I had fully recovered from the race.

So I used the occasion yesterday to hit out over a short distance, deciding to time myself over 300 metres. I hadn’t done any really fast stuff for more than a month. I covered the 300 metres in 50.4 seconds. It’s not really very fast, but I can’t expect too much too soon. In fact, that 300 metre time is roughly my PB for 400 metres (51.2) although that was 38 years ago. Had the two ‘me’s been racing over 400 metres together, the young me would have been finishing when the me from yesterday was just entering the home straight. I’ll get better, but not to the level of my 16 year old self.

Today’s world run photo is another from New Zealand. This was taken in the South Island town of Oamaru, which has a lot of really well preserved buildings from the 1800s.  This one even had an old train engine out the front. 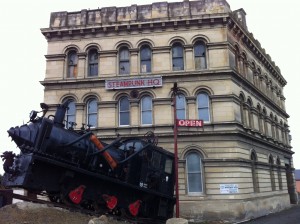 Later in the afternoon, I was joined by, Brad, a friend of Hannah’s, who ran the last 6 km with me. Brad’s parents, Margaret and Roger, came along too, and picked us up at the end, driving me back into the city.