What a fantastic ride it was today, from Mezzocorona to Castelbello. The entire ride was on superb bike paths, sometimes as wide as a road, and as smooth as the smoothest hot-mix surface on a newly laid freeway. Riding is so much more relaxing when you don’t have the mental strain of dealing with traffic, particularly on narrow mountain roads. It was a real pleasure today.

The day was, once again, generally uphill, although it felt very flat. The one exception was a few kilometres of climbing at a decent gradient. You can see all this in the data:

The ride was just 96.5 km in total, with 543 metres in elevation gain. Tomorrow we climb the mighty Stelvio Pass which at 2757 metres, is the third highest paved pass in all of Europe. Dave and I have climbed the highest, the Col de la Bonnette, although it’s only marginally higher at 2802 metres. I’ll be keen to report on the Stelvio in tomorrow’s post.

Here are a couple of photos from today. The first is of some grape vines near where we stayed last night. I was eating the grapes straight off the vine. The other is of the bike path we were on today, in this case between Bolzano and Merano. 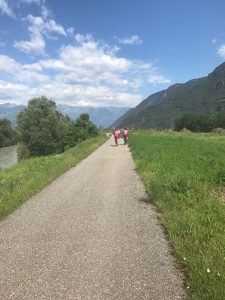