Back now from Tasmania, with a little niggle in my right Achilles. I’m sure it’s the result of a hilly run in Launceston yesterday morning. It’s a bit hard to avoid the hills there, although I did run more hills than I should have. I’ve now hit 100 km for the week with one day to go.

Here’s another old favourite photo, showcasing Carmel’s creativity. This was taken in the hills of western Pennsylvania during the world run – one of the great places to run. 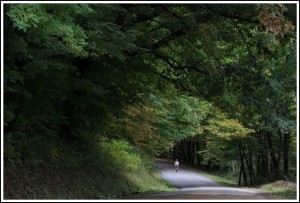