I did a big session yesterday morning, focusing on training for speed. The overall run was at a pretty good pace, but it was punctuated with a 300 metre sprint run in 47.8 seconds, plus various bounding, skipping, and jumping.

I actually felt better in the 300 metres than last week, even though it was nearly three seconds faster. I was constrained more by my legs than my lungs. If I was to maintain that pace for another 10o metres (which I think I could have if I ran on a synthetic track in spikes), it would have equated to 63.7 secs for 400 metres. I’d like to be running under a minute for the one lap by early next year, so I require a further four seconds. I reckon that’s achievable.

Today’s world run photo is another from Kaikoura on the east coast of NZ’s South Island. This one was from the opposite direction to yesterday’s photo. If you look at the photo from yesterday you’ll notice the sun is shining from behind the camera. This is looking into that very same sun. 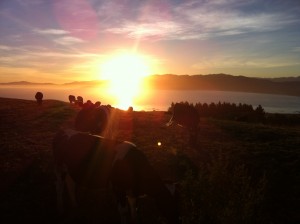