I’ve often been asked if I ever intend to do another lap of the planet. My answer has always been, if a sponsor or sponsors are willing to cover the cost, then why wouldn’t I. While this has not happened as yet, there are some interesting expressions of interest emerging. I actually had an informal preliminary meeting last week to gauge this interest. However, if it were to happen, it will be some time away yet.

One last view today of Kaikoura in the late afternoon setting sun. Next time we’ll move to the North Island of NZ. 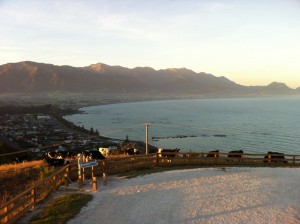 Today was a bit of a slog. A late night watching live music on Nashvillle’s music street, Broadway, coupled with an extremely humid day, made it a little tough getting through 55 km. But get through it I did.

Running out of Nashville was, at times, like yesterday’s run in – on roads that were built with no consideration for pedestrians. Once out of the city, however, the shoulders widened. The rest of the day involved much better road conditions.