I’m two days into my final taper now. I’ve said this before, but tapers don’t always result in an immediate feeling of energy and enthusiasm. At least that’s my experience. One can actually feel quite sluggish and lacking in energy, a consequence of a fairly abrupt cessation of one’s regular exercise routine. I have still been running four or five kilometres each day (and will be reducing this further), but that’s enough to leave me a bit listless. I should be fine by Sunday, though.

After the City to Surf I’ll be looking for a new challenge. I have the Tour de Bois coming up in October, but that’s easy riding and doesn’t require any real training. I have been invited to the Icarus Ultrafest in Florida in November. If I end up attending, I’d be competing in the 12 hour race (there is also a 24 hour, 48 hour, and 6 day race).

The other focus I’ve been considering is much shorter. I wouldn’t mind having another crack at the 400 metre distance at the state and national Masters carnivals. Ten years ago I was running around 56 seconds for 400 metres, so it would be good to see how much my times have deteriorated during the past decade. It will certainly be a change in pace from running around the world.

Today’s world run photo is of the Leaning Shed of Nebraska. I passed this dilapidated building one day in the western panhandle region of Nebraska, on a day that reminded me a lot of the terrain encountered on past Tour de Bois when cycling in western NSW, as can be seen from the background vegetation. 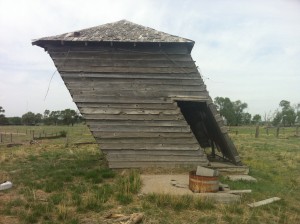 Yesterday was interesting. I left Adelaide early, being passed by Bernie and Lesley on their way back to Sydney. Soon after I reached the Adelaide Hills and began to climb. I was on a cycle path, but it soon ended. I then had no choice but to run on the freeway, which pedestrians were banned from. I even had to run through a major tunnel. Then it happened – a police car pulled up with his lights flashing. He informed me that drivers had been calling the police to let them know a runner was on the road. He was very friendly, and simply asked me to hop off the freeway at the next exit. Then, a few minutes later, another police car pulled up with his lights flashing, with the same message. Once again, he was very nice about it all. I was able to exit the freeway very soon after.

It was a very hilly day, with the most climbing I’ve done for many months. The Adelaide Hills is a very beautiful area, very reminiscent of the Blue Mountains, and towns like Leura and Blackheath.

Later I passed through Hahndorf, which is the oldest German town in Australia. It’s also a classic, with most buildings made of stone. It also had great German bakery, with delicious meat pies.

I ended the day in Kanmantoo, where we were joined by Bob and Sue. It was their last night with us, and they left this morning to head back to Sydney. We currently have no friends travelling with us, for the first time in more than five weeks.

Today I passed through the town of Murray Bridge, crossing the Murray River. The afternoon was spent running to Tailem Bend, a town I last visited in 2010, as part of the Tour de Bois. En route, I enjoyed a lunch of baked beans and sardines, courtesy of Marcelle McNally. This gave me extra propulsion during the afternoon’s run. I finished the day feeling fine, although my thighs were a bit sore from all the up and downhill yesterday.