Only two days to go now till the City to Surf. Once again, I felt sluggish and lacking in energy on my very short and gentle run this morning, but I’ve come to expect that as my body adapts to minimal physical activity. I’m confident I’ll be fine when it matters on Sunday.

It’s time for a very realistic evaluation of my prospects of “running my age” at the City to Surf. To be very honest, as hard as I’ve tried in training, I’d probably only give myself a 20% chance of doing it. I know what it takes to run 54 something for this very hilly 14 km race amid 80,000 runners, and I’m not sure I’m up to it this year. But I’ll be giving it my best shot. The good thing about this challenge is that, if I don’t succeed, next year I get an extra minute, and another the year after that. I’m sure I’ll get there eventually.

I’ll be posting another blog tomorrow morning to announce a big milestone. And another on Sunday after the race – unless I do run my age and get sidetracked in the celebrations. If so, I’ll send out a tweet to let you know.

The world run photo for today is from the prairies of South Dakota. It gives you a sense of the vastness and lack of variety of the region. Although it does present mental challenges, I did enjoy my time running through this landscape. 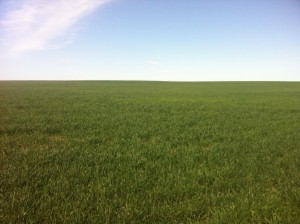 On this day we headed back to Sydney briefly to renew our US visas requirements.

More variable weather today, ranging from lovely sunshine to cold and windy rain squalls. For the most part, the wind helped push me along, although it changed direction often.

The wind was so unpredictable and strong in specific locations, it ripped the entire top off a caravan on the road ahead of me. I thought there had been a major accident as I approached, with police and emergency services lights flashing, and traffic being directed around what looked like a wreck in the middle of the road. It was a wreck, but not a car – just the body of the caravan. The chassis and wheels were still attached to the tow bar of the car, which was unaffected.

I passed through the towns of Coonalpyn and Tintinara during the day. From Tintinara, the run was exactly what I had done as a training run in 2010 during a stage of the Tour de Bois. It is the first time during the whole world run that I have run an entire section I’ve done before.

Tonight we’re staying in Tintinara, home of Tin Tin, and the scene of Reefton Humblewood’s most shameful episode ever on a Tour de Bois – the less said about that, the better.