Yesterday I prefaced a milestone I would be reaching today. I have now achieved this milestone. On my very short run this morning I reached 4,000 consecutive days of running without a day off. During this time I have covered 72,099 km, or an average of more than 18 km per day. On the 24th of this month it will be eleven years since I’ve had a day off from running. For the record, I have been logging my running mileage since Feb 14, 1983. In that time (11,863 days) I have run a total 135,040 km, or an average of 11.38 km per day.

It’s nice to reach this milestone, but my immediate focus is the City to Surf, now less than 24 hours away. Tune in tomorrow to see how I go.

For today’s photo I’ve gone back to the very early days of the world run, near Queenstown in New Zealand. The region abounds with gorges like this one, some of which host bungee jumping. 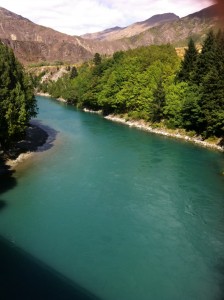 There have been times when the Garmin has attributed me with more than I have really run, but these occasions have been very rare, extreme in their error, easy to spot, and simple to correct. For example, like the time it added 1,360 km to my distance for that day – it’s not likely I’d ever miss something like that.