I finished last week with 125 km, bringing my total over the past fortnight to 300 km. I expect that will be enough to get me past my target of 108 km on Friday when I run for 12 hours straight. My current PB was run in extreme heat and humidity last November in Florida, and Friday’s weather conditions will be much more conducive to a better performance. I’m not quite as fit as I was last November, but I’m hoping the better conditions gets me “over the line”. I will be doing very little running ahead of Friday.

I have no idea where this photo was taken, though I know it was on the world run. I think it was somewhere in the US mid west, and I suspect it was one of Carmel’s more artistic and experimental efforts. 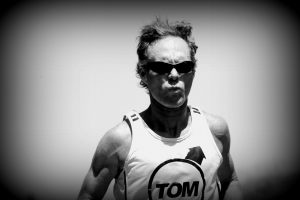